His "ROCK HATE vs HATE ROCK" (2000) was a painting which draws a struggle of the Punks and Plug-uglys. There seems to be remarkable attentions to the artists with minute description, and Obayashi is seemingly involved one of them. However, it is the strong sense of speed and violence which makes him different from others. The description with high density and strongly vivid motif from which one would turn the eyes away, cannot be found in his recent plane works. By the way, there is an impact sentence which was not in the text of press release but only published in the note written by the director and Hideki Aoyama and posted in the hall. I would not dearly introduce it here. 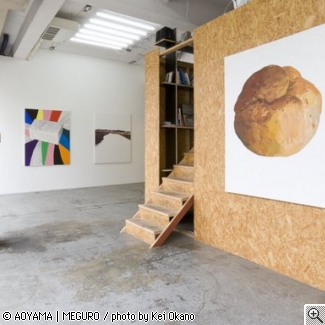