At 4:00 p.m., with the beginning of dusk, Shimura’s film works appear not on a screen but on the wall, ceiling and staircase landing of Yokohama Museum of Art. His creations have a strange power to make viewers sink down into them in spite of their abstract images, such as those of wave patterns of water, dots like stars and swinging curtains. Particularly, the exhibit which is projected on the curved wall along the staircase landing on the way to the library space, Art Information Center, would be really overwhelming. Viewers look at the creation while going up the stairs and approaching it, confront it at the landing, and face with it keeping some distance from it from the top of the stairs. Indeed, this exhibit make us strongly conscious of the characteristic of the display space - the staircase landing along the bent wall - , but at the moment we are folded in the creation at the landing, this trivial staircase landing makes us feel as if we are in another world. It is said that the word “Ukabe” included in the title of the exhibition has two meanings, namely, picturing the image in one’s mind and “Ukabe (place)”. This word makes me imagine another term, “Ukiyo (floating world)”, which means fugacious but undoubtedly “actual” world. Indeed, his works show us exactly fleeting and uncertain phantoms (images), but they also present us their reality. And at the same time they direct us to the “real space” - the wall in the museum - . In contrast to the “International Festival for Arts and Media Yokohama 2009”, which is compelled to establish the relationship between “viewing and being viewed” using a number of screens and monitors though it is held with the aim of suggesting communication through images, Shimura’s film works seem to succeed smoothly in forming communication between viewers and display spaces. For your information, his other creation has been dropped on the street at Koganecho Area Management Center. It also appears in the place after sunset. I recommend you to enjoy it together with his creations which are shown in the film festival. Lastly, let me introduce the exhibition entitled “DAI・KAI-KŌ” (Yokohama Museum of Art), which is held under the theme of presenting collection regarding the Tokugawa clan. This exhibition is also interesting in that it provides you with an opportunity to glimpse, in terms of art and craftworks, the transition from the late Edo period to the Meiji era - the infancy of Japan -, during which the arrival of the black ships of Commodore Perry aroused Japan from a good sleep, namely, “Ukiyo”. (Translated by Nozomi Nakayama) 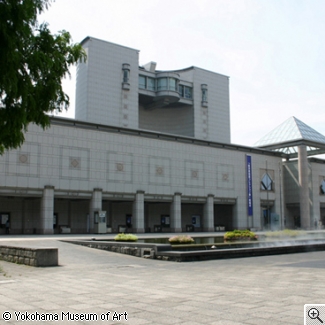