It is the second time for Tomoki Kaneko to show his creations in a solo exhibition held in Gallery Q since 2008. Thinking back that his works shown in the previous exhibition were made in the form of folding screens, on which the paintings of Mount Fuji were drawn using ink as their main material, he seems to show us a dramatic change of his creative style through this exhibition, in that his works presented this time were mostly created using colorful paints in addition to ink and their motifs are appealing. Nonetheless, the motifs used in his creations, namely, military things, such as helicopters and parachutes, which were depicted in the exhibits this time, as well as the above-mentioned Mount Fuji used in the works exhibited in the last solo exhibition, make me recall that Kaneko was born in Gotenba City, Shizuoka Prefecture, which is located at the foot of Mount Fuji and known as a military land. Thus, though there seems to be a big difference of impressions between his last and this time solo exhibition, it can be said that they have one thing in common in that they were held under the theme of his roots. His works shown in this exhibition give us a far and wide image as if they are covered with a thin “film”. I am not sure but this could probably be due to his aim to evoke for viewers his “memories” and “times”. Nevertheless, I was really puzzled by the gap of image between the motifs used in his creations and the appearance of the exhibits - the former gave me a deep and historical impression and the latter evoked for me a sophisticated image. Therefore, I was embarrassed how to enjoy looking at them. Nonetheless, it may be natural for Kaneko, who was brought up in such a land as written above, to create works which give us these kinds of impressions. Also, there would be no need to visit an exhibition in which you encounter creations which can be accepted easily. (Translated by Nozomi Nakayama) 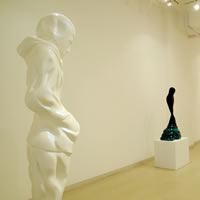